Have you ever seen a trailer like this?  Evan Jensen is one smart 18-year-old college student.  He saw a need an figured out a way to fulfill it.  Jensen’s brother works in the oil field.  Jensen went to visit his brother one day at work and realized the oil town was lacking many necessary essentials, so he came up with an idea for a shower facility and carried that idea out.

Jensen used a trailer his dad owned and converted the it into a shower house, complete with 5 shower stalls and a washer and dryer.

If trailers like these were set up in the truck parking areas, would you utilize them?  What are your thoughts on Jensen’s business?

Minneapolis (CNN) — It’s hard to find a lot of things in Williston, North Dakota, where thousands of workers have flocked for high-paying oil jobs. Houses and apartments are in short supply, and those living in temporary abodes must wait for hours at run-down truck stops for a hot shower at the end of a long workday.

Evan Jensen, 18, found that out firsthand when he visited the oil boomtown a few months ago to help his brother find work there.

The recent high school graduate, who is attending college this fall, knew there was an opportunity to make money in Williston, considered ground zero in the oil boom region known as the Bakken. Lured by the possibility of six-figure salaries, thousands have flocked to the region, leaving nearly everything in short supply.

Jensen’s first idea was to create a camper with bunk beds, and rent that. But then he had a better idea.

“While we were there we were getting pretty smelly,” Jensen said. “[We thought] ‘Man, you can’t get a shower anywhere.’ So that’s where [the idea] really sparked.”

Jensen said during peak after-work hours, popular truck stops in the area utilize a number system and people line up for showers. Sometimes the wait can be two or three hours, he said. 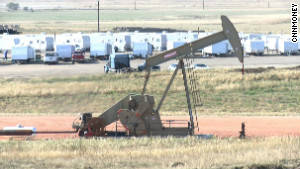 “I mean the truck stops — they’re just nasty,” Jensen said. “They’re hard to get in and out. You get to certain ones … and it’s just a zoo.”

He said one man told him when he’s “feeling desperate for a good shower” he’ll drive 60 miles out of the way.

He mentioned the idea of a shower house to his dad and, during their nine-hour drive back to their home in South Dakota, they mulled it over.

“By the time we got home I was on the edge of my seat because I was so excited,” he said.

A week later, enough time for his parents to realize he was serious and not being a fickle teenager, his folks asked if he was ready. He said he was.

Jensen used an old 53-foot semi-trailer from his father and, with the help of his family and friends, spent three weeks outfitting it with five private shower stalls. They also installed a washer and dryer, an office, and bought a separate water tanker.

In mid-June, they took the tanker and trailer up to Williston.

“We had a blast doing it,” Jensen said.

Gallery: Check out other boomtown opportunists 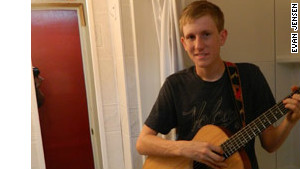 Showers run $10 a pop — $5 if you live in the makeshift village of campers where the mobile shower trailer is located. When he first got it up and running, Jensen was manning it from 5 a.m. until 11 p.m. He soon changed that when he realized 90% of his customers were coming between the peak after work hours of 4 p.m. and 11 p.m.

These days, the place is staffed by one hired employee, because Jensen is focused on his move to school. So far, they’re averaging between 20 and 25 customers a day, and he said he has probably made more than $5,000 — although it will be awhile before he pays off the start-up costs. Ideally he’d love to sell the business. He has put an ad on Craigslist.com asking for $95,000 “or best offer.”

To read more about Jensen and his business, follow this link to the original article on CNN.