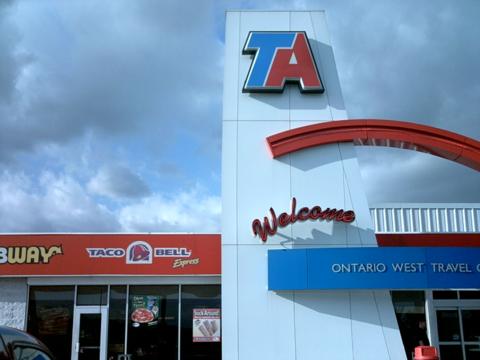 TA and Petro customers and employees also have contributed $4,700 in additional donations. Professional drivers contributed nearly $2,000 at the Mid-America Trucking Show in Louisville, Ky. in March. TA dedicated a large section of its show booth to SCF, a nonprofit organization that provides assistance to professional truck drivers whose medical problems have led to financial hardship. Employees of TravelCenters gave another $2,700 in donations through a variety of company events.

“We were very happy to hear that BP was continuing its Fueling Communities program this year,” said Tom O’Brien, TravelCenters President and CEO. “Through TravelCenters’ nominations, BP has donated a total of $60,000 over two years to SCF. These dollars are used to help truck drivers without health insurance, who are suffering financial hardship. BP’s help allows us to provide even greater support to our customer base.”

TravelCenters has provided support to the SCF since 2010. The company runs annual “Band Together for the SCF” fundraising campaigns, in addition to smaller collection efforts at tradeshows and employee events throughout the year. TravelCenters has helped raise nearly $500,000 for the charity.

“I can’t express how happy we are to have this support again from the BP Fueling Communities program,” said Dr. Donna Kennedy, Executive Director of SCF. “Our relationship with TravelCenters has made it possible for SCF to help more than 530 professional drivers since SCF began in 2007.”

TravelCenters will have its SCF donation prize wheel at this year’s Truckers’ Jamboree at the TA in Walcott, Iowa on July 12 and 13, the Expedite Expo in Wilmington, Ohio on July 27 and 28 and the Great American Trucking Show in Dallas on August 23-25.

If you would like to make a direct contribution to the Truckers Development & Relief Fund, you can visit them at www.truckersfund.com.