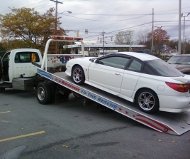 A judge in Columbus, Ohio a few months ago had a good laugh while reviewing the court filing of Michelle Mathis regarding her impounded Saturn hatchback. After being injured, hospitalized then released after 3 weeks, Mathis attempted to retrieve her car, but felt she was given the runaround from impound officials, who had actually sold it during her hospital stay.

She insisted her treatment represented a violation of her due process rights, but the federal official tasked to investigate the claim for the court was not impressed.

“In this case, the undersigned finds that plaintiff fails to state a facially plausible federal claim,” US Magistrate Judge Elizabeth A. Preston Deavers explained. “Plaintiff first attempts to a bring claim under the Fourth Amendment for unlawful seizure. From the facts plaintiff pleads, however, it appears that the seizure of her vehicle was proper. As both the Supreme Court and United States Court of Appeals for the Sixth Circuit have held ‘[t]he authority of police to seize and remove from the streets vehicles impeding traffic or threatening public safety and convenience is beyond challenge.'”

The judge maintained there was no constitutional problem implicated by a city refusing to return a car, as long as it was seized for a legitimate reason. Also – it’s a SATURN, fer goshsakes. Take the hint!

Simpsons celebrity lawyer Lionel Hutz could not be reached for comment, due to his conflicting schedule representing Tanorexic Mommy and her sunburned toddler.  We will report on this story as it develops.

Here’s the official court document regarding the lawsuit.