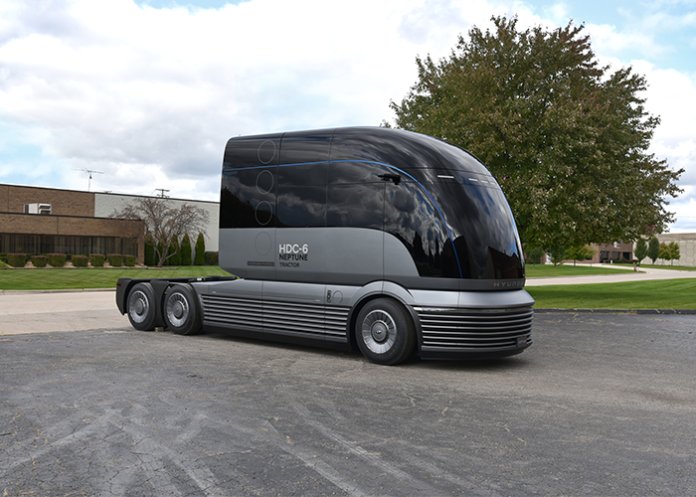 The most eye-catching of the two concepts was the HDC-6 NEPTUNE Concept Class 8 heavy duty truck. Hyundai says that the truck designers were inspired by “streamliner railway trains that ran from 1936 until 1959, a prime example of Art Deco industrial design.”

Hyundai says that while their main goal with the creation of the HDC-6 Neptune was to further fuel-cell electric truck technology, they were also concerned maintaining the truck’s unique aesthetics:

On HDC-6 NEPTUNE, the design team took packaging challenges and found new ways to combine both form and function. Due to increased cooling requirements, the grill of the concept commercial vehicle is applied as the theme across the entire lower portion of the Hyundai HDC-6 NEPTUNE. This creates a distinctive image while maximizing airflow. The grill concept also integrates the retractable steps, which are cleverly hidden. The combination of both cab over engine and conventional (bonnet) truck formats achieves packaging efficiency and improved ergonomics.

Hyundai also revealed a concept “green” refrigerated trailer dubbed the HT Nitro ThermoTech®. Hyundai promises that the trailer will offer quicker cooling and better temperature control than traditional refrigerated trailers and will provide “maximum power” whether the truck is off or idling. Other design enhancements include a side wall, front wall, and roof that are comprised of a one-piece structural foam panel meant to decrease trailer weight while increasing wall strength and thermal efficiency.

“Today at this show, by showing HDC-6 Neptune, the first hydrogen-only concept for Hyundai Motor Company’s commercial vehicles, we will start exploring opportunities in the United States commercial vehicle market,” said Edward Lee, Head of Hyundai Commercial Vehicle Business Division. “Furthermore, we are willing to work with other partners to pave the way to establish a hydrogen ecosystem for CV.”