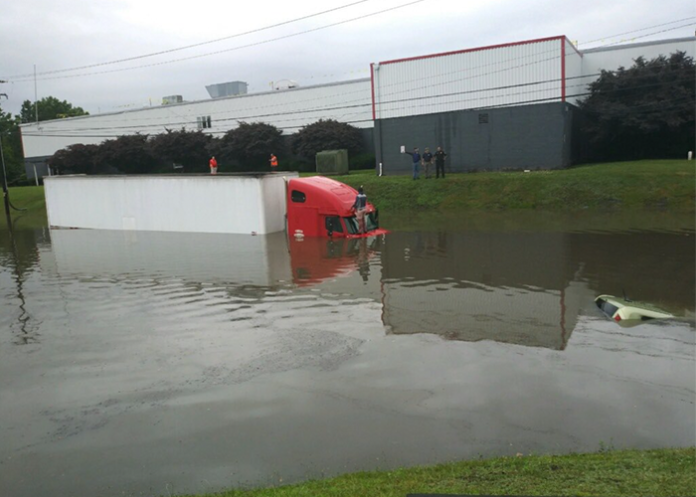 A truck driver found himself at the mercy of flood waters in Pennsylvania this morning.

The incident happened on the morning of Monday, July 8, in Pittston Township, Pennsylvania.

Two vehicles — the semi truck and a Kia — were stranded on Oak Street by rising flood waters.

In images captured at the scene, you can see a truck driver standing on the hood of his semi truck waiting for rescue from the flood waters. WNEP reports that rescuers were able to throw the truck driver a rope and life preserver to bring him to safety.

The Kia driver reportedly got stuck after attempting to drive through the rising waters.

Tractor trailer and Kia (in the foreground stuck in high water on Oak Street near Pittston. No one hurt. Tow truck crews on standby waiting for the water to recede. @wnep pic.twitter.com/FSU9KVL09z

The Pittston Township Ambulance Association also shared photos of the flood-stranded truck on Facebook and warned drivers about the dangers of trying to drive through flood waters:

“It’s 0908 and Oak St is still flooded! Here’s two reasons why you don’t attempt to drive through a flooded roadway. Yes, this can happen to anyone. Even the biggest vehicles. Please, do not drive around road closed signs and if you come across water on a road, do not drive through it!”

Though some local reports have indicated that the truck driver woke to find himself submerged in the flood waters, video was captured at the scene that appears to show the truck driver deliberately driving into the water.