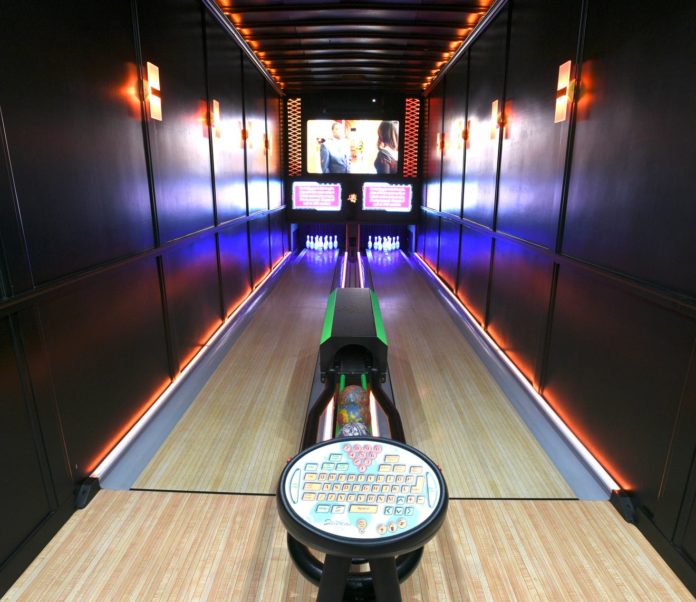 The world’s first ever mobile bowling alley has been built inside of a converted semi truck trailer.

The bowling-alley-on-wheels, called Luxury Strike Bowling, debuted in Michigan over the summer all thanks to Terrence Jackson Jr., an entrepreneur from Southfield near Detroit, Michigan.

Jackson drew inspiration for the mobile bowling alley from the rising popularity of ‘convenience’ businesses such as Amazon, Grub Hub, and Uber, all of which bring the products directly to the consumer. With this business model in mind, Jackson decided to find a way to bring bowling straight to the customer – and that’s how Luxury Strike Bowling was born.

“These companies made life easier for people and created economic growth worldwide, and I wanted in,” Jackson told The Detroit News.

Jackson says that the mobile bowling alley’s design took years to complete, a process which was further slowed by the unavailability of building materials during the COVID 19 pandemic. Still, Jackson was able to finish the project and launch the bowling alley on Friday, June 19th, otherwise known as Juneteenth.

Luxury Strike Bowling features automatic bowling lanes that are slightly shorter than standard lanes, and at only three pounds each, the bowling balls are much lighter than traditional balls. However, the mobile bowling still manages to capture the traditional bowling alley feel with a scoring system, temperature control, neon lighting, an 80 inch theatre screen, a state-of-the-art sound system, and even a loft area called the “Skylounge,” that can hold up to 15 people.

Jackson says that Luxury Strike Bowling is now available to rent for parties, corporate events, church gatherings, and anything else you can think of in Southfield and surrounding areas.