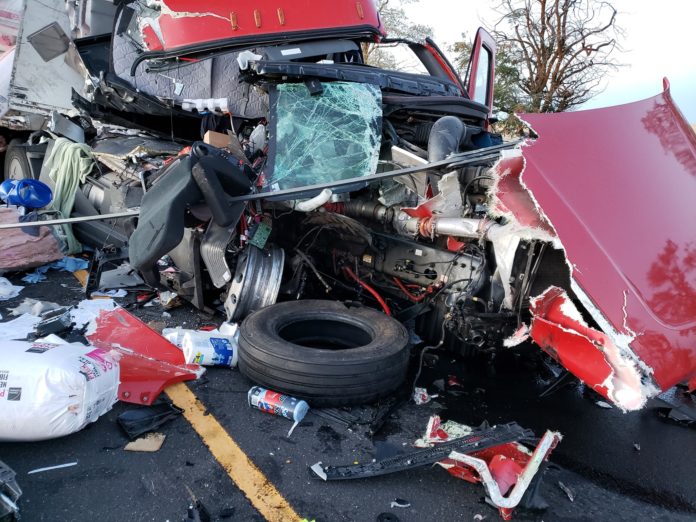 The Oregon State Police (OSP) recently shared a series of photos from a violent semi truck crash as a reminder to drivers to slow down when making a turn and to obey no passing zones.

The crash occurred around 5 a.m. on October 6 on Highway 97 at mile marker 40 north of Kent.

According to OSP, a truck hauling a loaded flatbed trailer was traveling south when the driver “attempted to pass on a corner in a no-passing zone at a high rate of speed in the dark.”

Troopers say that while passing, the truck driver slammed on the brakes, leaving more than 200 feet of skid marks before the truck partially jackknifed and struck a northbound red semi truck nearly head-on.

OSP says that the crash tore off the right side of the cab of the northbound truck.

The load being transported on the flatbed came off the trailer and came to rest blocking the northbound lane and shoulder of the highway.

A white southbound truck was also clipped during the crash.

OSP says that the driver hauling the flatbed trailer was cited for careless driving.

“We are sharing these shocking and scary photos as a reminder of the importance of obeying passing zones and slowing down when negotiating turns. Amazingly there were no reported injures of anyone who was involved in the crash,” OSP said.