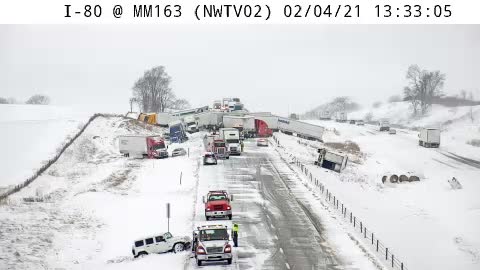 A YouTube user shared stunning video of a pileup crash that occurred on I-80 near Newton, Iowa, on Thursday.

The Iowa State Patrol has confirmed that there was a major pileup in the eastbound lanes of I-80 between Colfax and Newton after a blizzard moved through the state.

Troopers say drivers should “expect long delays as we and law enforcement partners assess the impacts and the roadway gets cleared.”

Video of the pileup crash aftermath was captured and shared by YouTube user Stryker Vance.

In two minute video captured at the scene, you can see two police vehicles partially crushed amid the crashed trucks.

This is a developing story and it isn’t yet clear how many vehicles were involved or whether anyone was hurt.

Another pileup video was shared by Facebook user Brandon Nimmo.