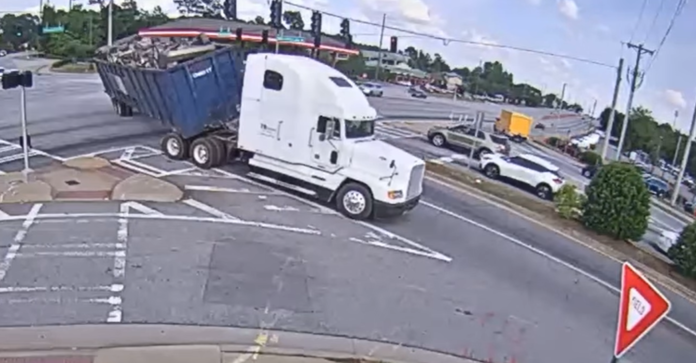 A semi truck hauling scrap metal got a little too excited late last week, leading to an overturn that left metal strewn across an intersection.

The incident happened at the intersection of Pleasant Hill and North Berkeley Lake Road in Gwinnett County, Georgia.

Luckily, no one was hurt in the accident, but the driver was issued two citations by the Duluth police and five violations by the Georgia Department of Public Safety.

“Load looks top heavy, should have checked who and how they loaded it, this could of happened to anyone,” commented one viewer.

“The load is definitely loaded too high and heavy on top. And as soon as the driver noticed the load might be leaning the brakes are applied. They are in the middle of the turn at that point. Only makes the lean worse. You can see the load fully tip after this point and the load is now pushing/pulling them as opposed to them controlling it,” added another.