One of the most respected names in trucking is looking forward to celebrating a major milestone in company history to kick off the new year.

The 55 year milestone is an opportunity to look back at how deBoer grew and adapted over the years while also looking forward to exciting developments in 2022 and beyond.

deBoer got its start as a small cattle hauling operation in 1967 under the leadership of founder Ron DeBoer. In 1980, as the trucking industry evolved during industry deregulation, the company strategically shifted away from hauling livestock and began hauling paper and other dry freight. In 1993, deBoer expanded by acquiring Texas carrier North American Freight Service. In June of 1994, deBoer broke ground in Blenker for a new corporate office headquarters building that remains the hub for company operations decades later.

Mr. deBoer passed away in 2020, but his legacy lives on through the company he created as it transitioned to the second generation of family ownership. deBoer Transportation’s overarching philosophy was neatly summed up by Ron DeBoer when he said, “We don’t want to be the biggest truckload carrier, but we want to be the best.“

deBoer Trucks Through the Decades

Take a look back at some vintage deBoer trucks starting from the company’s early days of operation.

Company leaders credit a willingness to adopt new technology and more modern methods of operation as a major reason for deBoer’s decades of success. Since the company’s inception, Ron DeBoer was strongly committed to research and keeping on top of the latest trends in technology, as well as to looking for ways to use tech to make drivers safer, more comfortable, and more efficient. A commitment to “driver-driven” technology has been key in deBoer’s steady success and growth over 55 years.

In 1985, deBoer stood at the forefront of trucking technology after purchasing the company’s first computer with the Geostar tracking system. In 1990, Qualcomm was purchased and installed in tractors — and this game-changing system is still in use today. Additionally, in 1994, deBoer started ordering trailers with tracking computer chips, helping to protect both freight and drivers while out on the road.

The future looks bright for deBoer and its drivers

The company’s commitment to seeking out forward-thinking, driver-centric solutions continues to this day.

For example, deBoer recently launched an Electronic Trip Sheet with Transflo, allowing drivers to fill out a trip sheet on the Transflo app instead of filling one out by hand. This is a big company change that makes each driver’s work day just a little bit easier.

In the last 18 months, deBoer has once again adapted in a driver-friendly way by opening up several regional lanes or “power lanes” to offer more home time opportunities to drivers, where at one time there may have only been OTR positions. There are still plenty of opportunities for new OTR drivers as well as ones who have been with deBoer for many years, but the new power lanes ensure that there are ample job opportunities for deBoer drivers who need more home time.

deBoer is an award-winning asset-based transportation and logistics provider offering reliable services to clients throughout the U.S. and Mexico, with terminals located in Blenker, Wisconsin and Cedar Hill, Texas. The company operates a fleet of 160 late-model Freightliners, Volvos, and Internationals and 660 van trailers. If you’re interested in becoming part of the deBoer tradition as a member of the driving team, please click here. 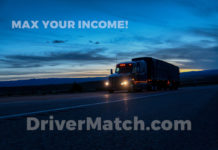