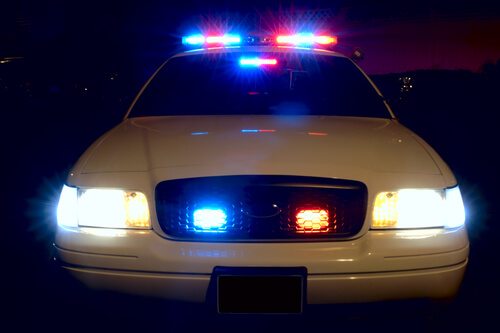 Mississippi police officers warn drivers not to pull over if they are being stopped by a police officer, saying there is a homicidal fake cop on the lose.

“We urge everyone to be cautious while driving, especially at night,” the Tate County Sheriff’s Office posted on their Facebook page. “If someone attempts to pull you over with flashing lights and you feel unsure of stopping, DON’T PULL OVER. Use your cell phone and dial 911 and if it’s a real officer then the dispatcher will confirm it for you and if it’s not a real officer they will send help to you.”

“Our deputies have been told not to overreact if someone does not immediately pull over,” the sheriff’s office wrote. “Your safety is our primary concern.”

Three days later, Lori Carswell, 45, of Mississipppi, was found near her car on Highway 713, near Tunica County.

Authorities believe the perpetrator may be driving an unmarked gold Crown Victoria, similar to a police cruiser.

According to Tate County Sheriff Brad Lance, on April 2, a woman was pulled over by a man driving a a gold Crown Victoria, with flashing lights.

The man driving the car was not outfitted in a police uniform, he was wearing jeans and a plaid shirt.  According to police, the woman became suspicious and would not roll down her window all the way.  The woman demanded to see the man’s badge and he became agitated and fled.

Authorities say the shootings appear to be random, as there is no known connection between any of the victims.

“We do not have any witnesses at this point,” DeSoto County District Attorney John Champion said. “We’re asking the community for help.”

Drivers, if you are pulled over in Mississippi, drive slowly to the nearest truck stop and call 911.  Please share this information with others.