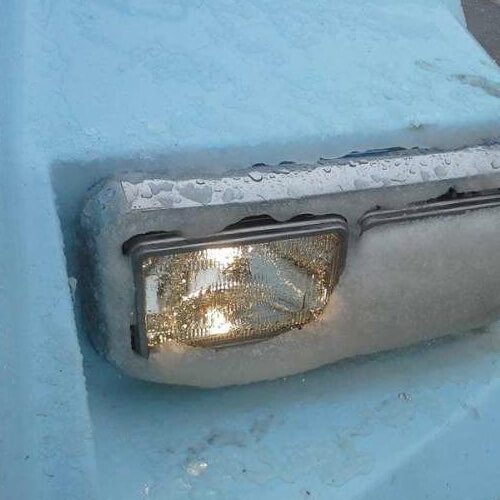 Heads up for the drivers out there running LED lights …Just had a bad time over Donner Pass last week.  Started over at Nevada side, hit a hard, wet snowstorm. This is a pic from the next day going back, but you will see the problem. The LED lights have no heat in them to melt snow or ice off the lights. My lights froze up; still on but you cant see anything with them covered in snow.  My high beams are still halogen, so onec they melted the snow I could see again.  So you need a back-up plan if you’re running LED lights have a fog or driving light that is not an LED light. I had my LED flashlight sitting on the dash of my KW till I got on the side of the road to clean them off.

Johnny F.- Spraying them with pam cooking spray are WD40 will stop them from freezes!

Zachary B. -LEDs… like your taillights, some aftermarket headlights and nearly all fog lights and clearance lights on the market… are prone to freezing. Spray them with cooking spray, Fabulous PB Blaster or WD-40 before you head out.

HIDs don’t have this issue.

Christopher T.- I put wd-40 on all my lights when going through snow or ice to repel the water. It works.

Kris B.-The reason LEDs last longer is because they work at a much cooler temp along with the multiple diodes. That’s why, as a owner/op that runs the Rockies where it snows 6-8 months a year, I do not use LEDs in my head or tail lights. I may have to occasionally replace a light because the life is shorter with non-LED but after 150 miles of snow covered road, my lights melt the snow pack off so I can see where I’m going and people can see me when they are behind me.

John M.-Spray with pam cooking spray the snow will not stick.

Beto G.-Clean your LED beams with antifreeze …..same as your wipers blades.

Jason C.-This is why I never have and never will get LED headlights. I live up north and could’ve told you this before wasting money on them! Get HID instead. You’ll get the brightness and the heat to melt snow.

Chris D.- I told guys this many times as a mechanic. They didn’t care, I need more light… So I gave them some twin bulbed driving lights and slapped 100w replaceable insert bulbs in er and said try that, never complained again. LED doesn’t suck so much amperage, it’s a tenth of a incadecent bulb. Good if you run 19 of them, but 2 doesn’t save the alternator. That’s considered normal load. Oh and if you decide to go the 100w way, install a relay!


Max V.-Tip spray all lights & tag & grill & wipers with DEICER , lasts about half a day

Rodney R.-The same goes for LED tail lights, they get covered with snow. I switched to incandescent so it will melt off.

Rodney S.- I have a 2009 Pete… Same problem . Solution I found . Clean headlights wax with McQuires paste wax when it’s dry outside. Doesn’t prevent it totally but I can run atleast 8 hours without it building up.