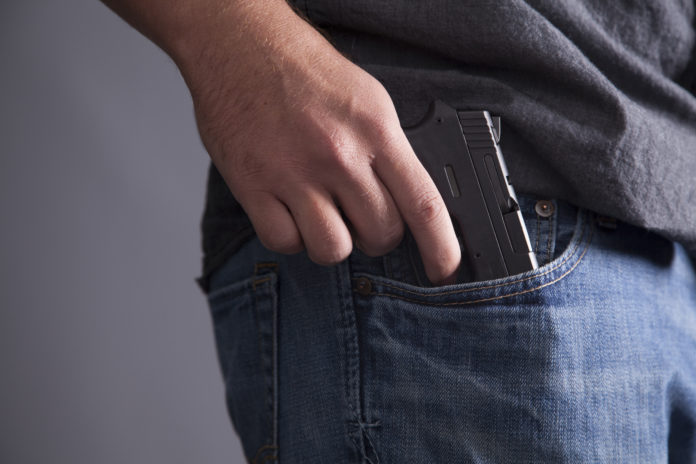 Don’t assume you’re legally carrying a fire arm if you’re licensed in your state — some states won’t honor your permits.

We know how dangerous it can be out on the road, and many of you have said you carry a gun for protection– understandably so.

Click the map to find out which states will honor your permit and which ones will not.

Information taken from US Carry.com

There is no law that prohibits drivers from having guns in their trucks, however, guns are not allowed on most U.S. military bases and many carriers prohibit guns.

In addition, if you are a cross-border driver, you are forbidden to have a firearm in your truck. Handguns and concealed weapons are not allowed in Canada. If you are caught with a weapon in your truck, you will be in hot water and will likely face a very hefty fine.

Currently, the only national gun law regarding transporting firearms is 18 U.S. Code § 926A. Interstate transportation of firearms states. The law states:

Notwithstanding any other provision of any law or any rule or regulation of a State or any political subdivision thereof, any person who is not otherwise prohibited by this chapter from transporting, shipping, or receiving a firearm shall be entitled to transport a firearm for any lawful purpose from any place where he may lawfully possess and carry such firearm to any other place where he may lawfully possess and carry such firearm if, during such transportation the firearm is unloaded, and neither the firearm nor any ammunition being transported is readily accessible or is directly accessible from the passenger compartment of such transporting vehicle: Provided, That in the case of a vehicle without a compartment separate from the driver’s compartment the firearm or ammunition shall be contained in a locked container other than the glove compartment or console.(Added Pub. L. 99–360, § 1(a), July 8, 1986, 100 Stat. 766.)

As of this publication, there is no federal gun reciprocity law. If you are found with a gun in a state that does not honor your state’s permits, you will likely go to jail.